Following a session in our Green Apprenticeship Permaculture Design and Training course about unique solutions for what appears to be a site that is inappropriate for growing vegetables, I was asked:

Question: how to grow a garden in an urban area where the ground is polluted?
[Polluted, i.e. the term is ‘brown-field‘ where lead or mercury has built up from years of soot from burning coal and unleaded gasoline, or other toxins are in the soil and we are not going to use veggies we want to eat for bioremediation].

There are a number of solutions in which the growing media can be separated from the soil and when avoiding the soil altogether.
In the past I have blogged about the impressive work at Growing Home Chicago. Growing Home’s mission is to operate, promote and demonstrate the use of organic agriculture as a vehicle for job training, employment and community development (for homeless and unemployed in South Chicago). Founded by Harry Rhodes (formerly a member of neighboring Kibbutz Grofit): http://growinghomeinc.org/, their South Side of Chicago farm of raised beds of compost in poly-tunnels sits on an old asphalt parking lot. 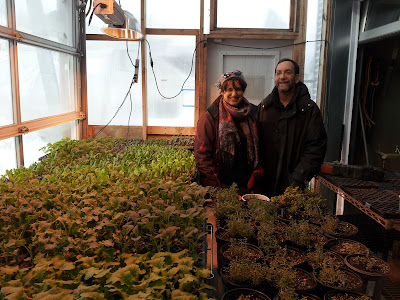 Harry and Farm Manager in the greenhouse. I demand to see the poly-tunnels! 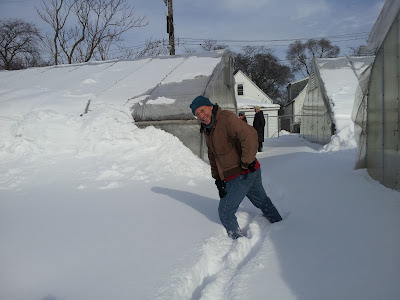 Just a tad bit of snow…a challenge to year-round urban farming.
Inspirations on food justice and health from www.growinghomeinc.org/
Growing Home and all their wonderful jazz is a big operation.

What would be the simplest solution – even simpler than building a raised bed?

We love Incredible Edible Propaganda Gardens www.incredible-edible-todmorden.co.uk/
I suggest trying out a straw bale* as the growing medium. 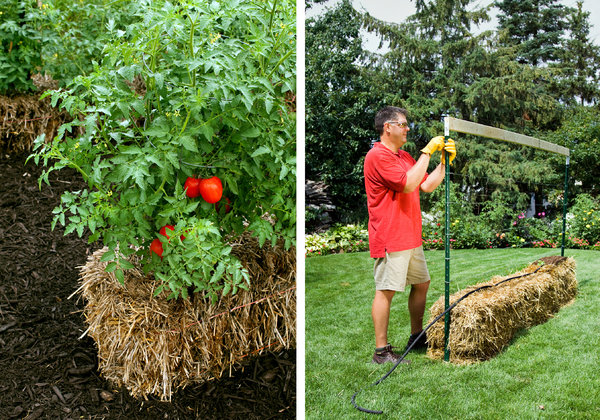 Left, a straw bale conditioned with fertilizer and water creates an ideal medium for growing plants; and Joel Karsten in his yard setting up a straw-bale garden. CreditTracy Walsh/Poser Design, the New York Times
If you know me, you’d think I’ve said something sacrilegious. How can strawbales be used for some purpose other than building houses?
Turning Jungle Gyms into Earthquake Proof Houses – the Lotan EcoCampus
This video explains the ‘conventional’ process. This works well when your resources are
a. grab those straw bales that will be used as displays for Halloween Pumpkins before they hit the dumpsters!
b. everything else CAN be purchase from Home Depot et al as Dig In’s Joel Karsten, Author of Straw Bale Gardens www.strawbalegardens.com explains:

Fertilizers to get the microbes going, potting soil for seeding….hmmm…
Lets put on our Permaculture thinking caps…where could we get some free nitrogen to spike the decomposition process (wink wink, water the bales to dilute your ‘donation’)? And instead of purchasing potting soil, sourcing compost from a kind neighbor should be a ‘doable’. And instead of the elaborate automatic watering system… how about having fun with Grandma’s good old watering can that is weeping to be used (or a newfangledrecycledcontainerrepurposedforbalewetting) filled with water from your bucket in the shower or kitchen basin water?

newfangledrecycledcontainerrepurposedforbalewetting
*Straw bales are not Hay bales. Hay is horses, NOT for houses. If you can get hay bales for gardens then your microbes and veggies will benefit from the nutrients available. These instructions work for both straw and hay:
https://www.endalldisease.com/hay-bale-gardening-effortless-food-production-with-no-weeds-no-fertilizer-less-watering-video/
Let me know if it works for you.